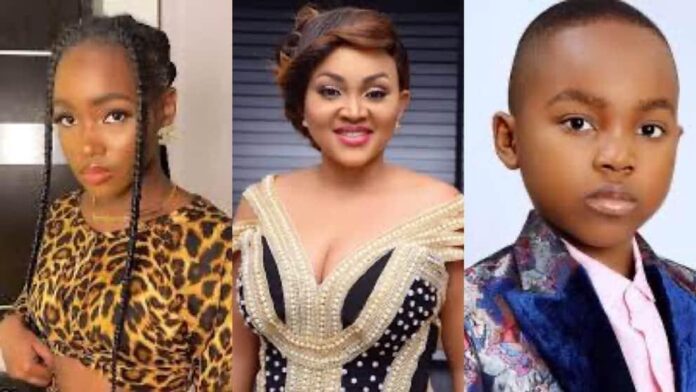 Mercy Aigbe is a star in the Nigerian Movie industry. not only that but a businesswoman, model, fashionista with two beautiful children.

According to Wikipedia, Mercy hails from Benin City, Edo State capital which is the capital of Edo State and she is the second child in a family of five.

For her tertiary education, Mercy attended The Polytechnic, Ibadan, Oyo State and she obtained an OND in Financial Studies. Later in 2001, Mercy Aigbe finished from the University of Lagos with a degree in Theater Arts

Mercy was married to Nigerian hotelier, Lanre Gentry in 2013 and they got separated in 2019 over marital conflict and assault.

Michelle Aigbe is the firstborn and the only daughter of Nollywood actress, Mercy Aigbe. She was born on the 11th of July, 2001. She’s a product of Mercy’s first marriage.

She’s a well-known model, influencer, socialite, and entrepreneur. She was born and brought up in Lagos. She’s known as michelleio_ on Instagram with 1.1 million followers.

She’s one of the top richest models in Nigeria. She has worked with top fashion cosmetics in ye country. She’s currently 20 years old.

She’s a close friend to Nigeria teen influencers, Rachel Dolls and Priscilla Ajoke Ojo. She owns a Youtube channel.
She has a stepsister from her mother ex-husband side named Adeola Olanrewaju Gentry.

Olajuwon Gentry is the second born and the only son of a Nollywood star, Mercy Aigbe and his father is a Nigerian hotelier, Lanre Gentry.

He was born on June 18, 2010. He’s the younger sister of Michelle Aigbe making him the youngest of the two children of Mercy Aigbe.