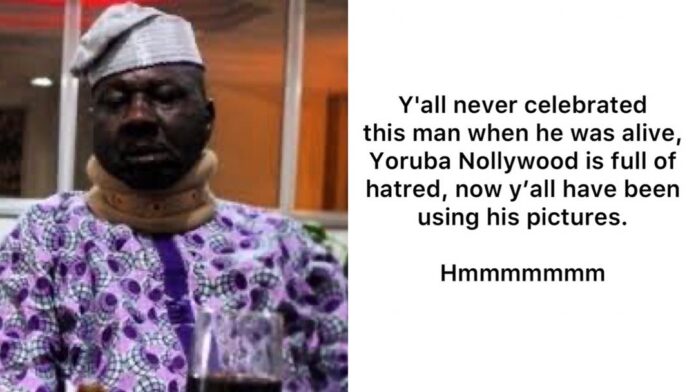 The lovers of Yoruba Nollywood have berated Yoruba movie actors and actresses for neglecting late comic actor, Baba Suwe while he was alive.

They took the pages of various actors complaining about how those thespians neglect themselves while in distress. Many attribute it hatred and unnecessary competition among them.

Baba Suwe who died yesterday was battling with serious illness for some years and did not receive much financial support from his colleagues.

According to a fan, aladedestinno who commented on Odunkade Adekola’s post on Instagram, he said if Baba Suwe had gotten full support and not been neglected, he might still be alive.

“Had it been he had you guys support …he might be alive now ….but no…he did not…now you guys are posting him when he’s no more…smh”

abdullah_jamiu_apase: “But Mentor why can’t you try and help this man when he’s still alive? 😢“