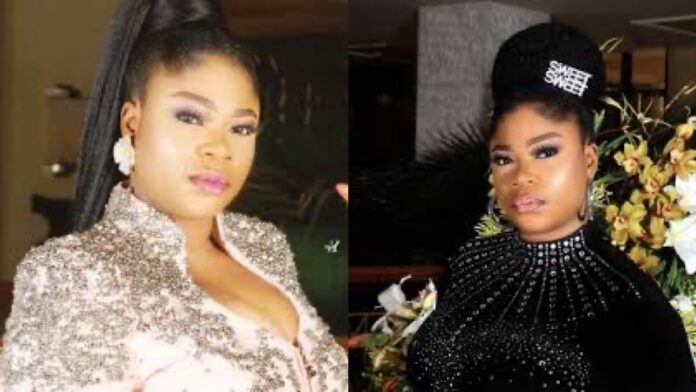 The biography of Eniola Ajao, a Nollywood Actress and Producer actress well-known for her ability and capability to interpret her script well.

According to Wikipedia, Eniola Ajao was born on the 21st of January in Epe, Lagos State, Southwestern part of Nigeria.

Eniola Ajao is a Nollywood actress and producer born in the Epe area of Lagos on the 21st of January.

Eniola Ajao was born on the 21st of January. She didn’t publicise her year. She’s from Epe in Lagos, State.

Eniola Ajao went to Saint Michael’s Anglican primary school at Epe while she attended Army Secondary School also in Epe. She further her tertiary education at Yaba college of technology popularly called Yabatech to study accounting. She didn’t stop there, she went to the University of Lagos to obtain a bachelor’s degree in Accounting.

Before she went to Yaba College of Technology, she was under the tutelage of a producer called Adesanya Adeshina. In one of her words, she’s always careful of the script she accepts.

Her first major role was in 2004 in a movie titled ‘Igba Aimo’. She also featured in Alani Pamolekun. Odunlade Adekola has helped her in the industry.

According to Eniola Ajos, she said that she’s in a serious real but she didn’t publicise who the man is.

Is Eniola Ajao married? Eniola is yet to be married to anyone but was reported.

Who is Eniola Ajao Husband? Eniola presently does not have a husband. The actress is not yet married.

Is Eniola Ajaoa twin? Yes, Eniola Ajao is a twin, her name is Kehinde Eniola Ajao. They are the last children in their family. The duo grew up together and both attended the same primary and secondary school.

Eniola Ajao’s role models are her father and Odunlade Adekola. According to her words, she said Odunlade inspired her a lot, and she wishes to be like him.

Eniola Ajao is an active user of Instagram. Her username is @eniola_ajao