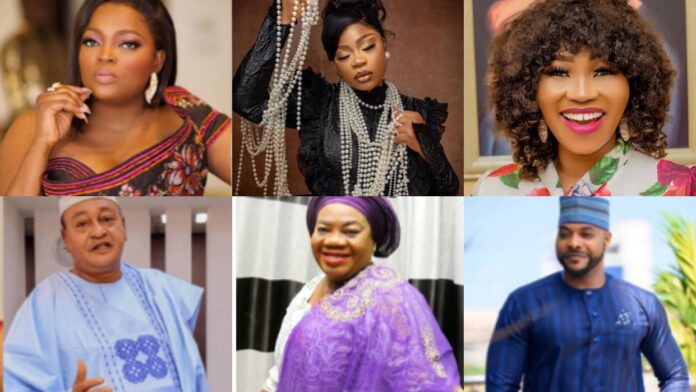 The Yoruba movie industry has produced great and talented actors and actresses and Lagos State actors can’t be overlooked with excellent thespians.

The indigenous actors from Lagos State are making the movie industry move forward. The State is proud to produce great, skilled, determined, hard-working and talented actors.

Lagos State is one of the southwestern states in Nigeria. It’s the largest city in Africa. It is also the second-most populous city in Nigeria. There are about ten actors and actresses in Nigeria that are from Lagos State, below would show the list of them.

She is an indigenous of Lagos State. She was born on the 24th of August, 1977. She is the second child of a family of three children.

She became famous when she produced the movie ‘ Omo Ghetto’. She married the love of her life, Abdulrasheed Bello popularly called JJC Skills in May 2016. They are blessed with two twins.

Bolanle Ninalowo is a prolific Nollywood actor and producer. He is better recognised as Nino B. He was born on the 07th of May, 1980. He was born in Ikorodu, Lagos State.

He is the second born of a family of eight children. He entered the movie industry in 2010 as a movie producer. He became recognised when he was featured in ‘ Desperate Baby Mama’.

He is married to the love of his life, Bunmi Ninalowo. Their union is blessed with two children; Aliyah and Morankiyo Ninalowo.

Eniola Ajao is an award-winning Nollywood actress, movie producer and model. She celebrates her birthday every 21st of January. She was born in Epe, Lagos State. She is a twin sister.

Abimbola Thomas is a prolific Nollywood actress, entrepreneur and model. She celebrates her birthday every 29th of September. She is the fifth child in her family and the only girl.

She became popular when she was featured in ‘ Omo Ghetto’. She is the owner of Bimbally wine and liquor. She has a son named Jayden born in the United States on the 16th of July, 2016.

Abimbola Aisha Ademoye is an award-winning Nollywood actress, model and brand influencer. She was born on the 04th of February, 1991.

She is an indigenous of Lagos State. She is the second daughter and the last child of her parent. She lived with her father. She started her acting career at the age of seven.

Olanrewaju Adeshina Hassan is a veteran Nollywood Yoruba and English actress better recognised as Iya Awero. She was born on the 3rd of October, 1950. She is an indigenous of Lagos Island (Isale Eko), Lagos State.

She has been in the movie industry for decades. She and Ojo Ladipo formed a theatre group after graduating from the School of Drama founded by Nobel laureate, Woke Soyinka.

She became known as Iya Awero when featured in the television comedy series titled ‘ Comedy Half Hour’.

Sola Fusudo is a veteran Nollywood Yoruba actor, scriptwriter and director. He was born on the 18th of March, 1958. She is an indigenous of Igbo Oye, Epe, Lagos State.

He is the head of the Department of Theatre Arts at Lagos State University. He has been in the industry since the 1980s. He is married to Yetunde Fusodo.

Jide Kosoko is a veteran Yoruba Nollywood actor, movie producer and director. He’s from a royal Kosoko. He was born on the 12th of January, 1954. He is a native of Lagos Island (Isale Eko), Lagos State.

He has been in the movie industry since 1964. He has 12 children and they are doing well in their endeavours.

Temidayo Amusa is a prolific Yoruba Nollywood actress, movie producer, brand ambassador and musician. She was born on the 20th of July, 1983. She was born in Ikeja, Lagos State, southwestern part of Nigeria.

She is the first child of a family of five. She is the founder of the Dayo Amusa foundation. She started professionally in 2002. She is the owner of Paydab Nursery and Primary School. She has a child Ayomikun Amusa.

Yewande Adekoya is a prolific Yoruba Nollywood actress and movie producer. She was born on the 20th of January, 1983. She is an indigenous of Lagos State. She entered the movie industry in 2002.

She is popularly known as Omo Elemosho. She was married to Abiodun Ishola Thomas and there are blessed with two kids.