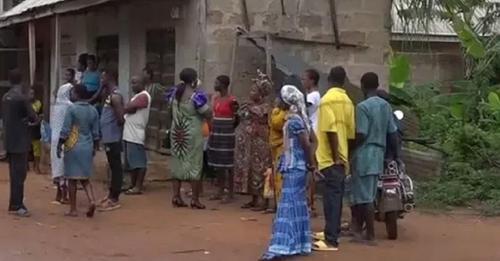 A female Ibadan resident was reported to have stabbed her husband to death as he planned to marry a second wife despite her being pregnant.

The pregnant woman, Omowunmi Joseph was arrested by the men of the Oyo State Police Command for allegedly taking the life of her husband in Ibadan, the state capital.

The incident occurred on Monday, April 4 at Odoye, Alaadorin area of Ibadan North Local Government Area of the state.

According to Daily Trust, Omowunmi stabbed her husband, Joseph Nwankwo, to death while he was asleep at about 2am over plans to marry a second wife.

The couple reportedly started having misunderstandings about two weeks ago when the deceased told his wife that he was planning to marry another woman from his hometown.

After killing her husband, Omowunmi reportedly summited herself to the police at Iyaganku and was transferred to Yemetu police division.

Meanwhile, The Police disclosed that the Joseoh’s corpse has been deposited in a mortuary.

Owo Killings: I Will Always Hate Nigeria – Lady Mourns As Her Parents Were Killed In Church By Unknown Gunmen