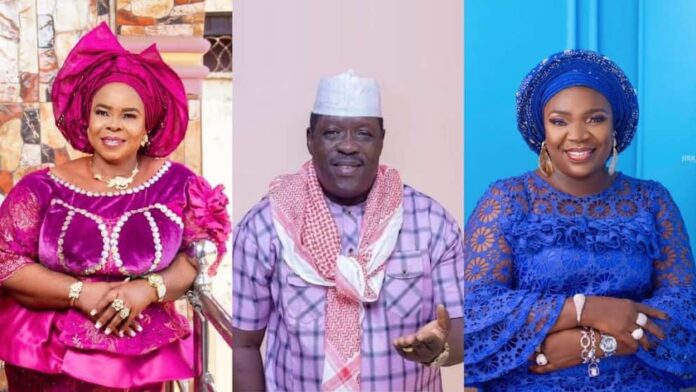 Alhaji Taiwo Hassan well known to many people as Ogogo is a veteran Yoruba actor and producer who has been in the movie industry for three decades.

Ogogo is happily married to Two wives and God has blessed him with six children, three sons and three daughters.

The actor hailed from Ilaro Town in Ogun State, his birth took place on the 31st of October, 1959 at the same Illaro.

Ajoke Taiwo is the first wife of Alhaji Taiwo Hassan. Ajoke is a Christian, despite her husband being a devoted Muslim.

Ajoke celebrates her birthday on the 9th of March every year. The religious difference between them has never affected their union as they continue to live happily in their family.

She and Ogogo have two daughters and a son named Halima Taiwo, Shakira Taiwo, Jubril Taiwo.

“After many years in their marriage, Taiwo Hassan decided to take a second wife. When he told his wife, she first kicked against it. But with Ogogo’s family intervened, Ajoke later ceded his husband’s request and she accepted to have a junior wife.“

The second wife of Taiwo Hssdan is Taibat Hassan. Unlike her senior wife, Taibat practices the same religion as her husband.