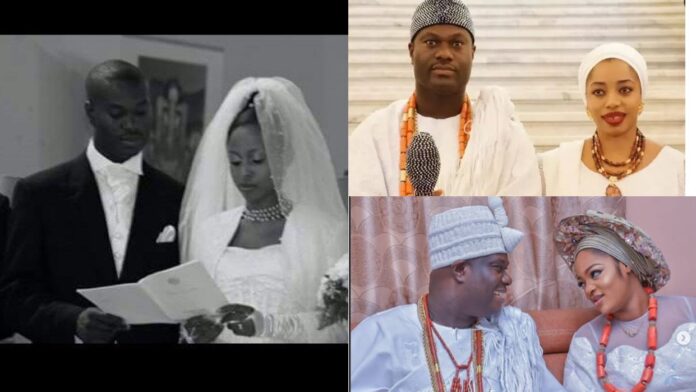 Oba Adeyeye Enitan Ogunwusi, the current Ooni of Ife has received the news of his wife, Naomi Silekunola announcing her separation from him.

During his youthful age, before getting married, the Ooni was in a relationship with Omolara Olatunbosun. The 29-year-old daughter of Ooni, Princess Adeola was a product of the relationship.

The king did not get married to Omolara, the only thing they have together is the daughter between them. Let’s take a look at the tHree ex-wife of the Ooni.

Adebukola Bombata is the first legally married wife of Oba Adeyeye Enitan. He got married to Adebukola in 2008, seven years after he ascended the throne of Ooni of Ife.

After ascending the throne, the duo got separated for a reason not disclosed.

In 2016, the Ooni took another wife, who is from Edo State. She is Olori Wuraola, who is now known as Queen Zaynab-Otiti Obanor. The Edo lady is the second wife of Oba Adeyeye.

A year after, which was 2017, the second marriage also got crushed without any reason from either the king or the queen.

In 2018, Ooni married another wife. She is Evangelist Naomi from Ondo State. She is known as Olori Silekunola after her marriage to Oba Adeyeye.

Surprisingly as it may be, Evangelist Naomi announced her divorce from the Ooni on Thursday, 23rd of December, 2021.

She stated that her decision was due to the changed person the king is noting that Oba Adeyeye she knows now is diffresnt from the one she knew when they got married.