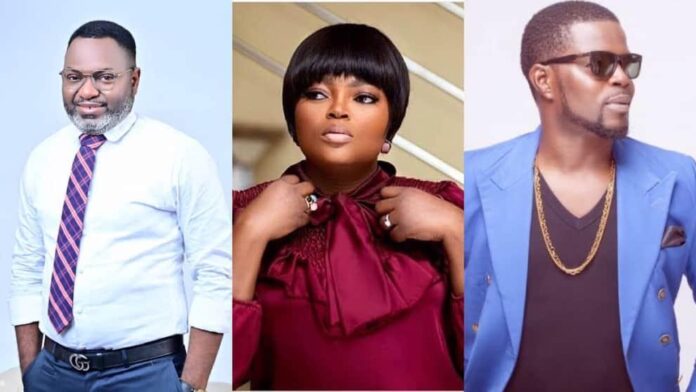 According to Wikipedia, Jenifa as she is well known was born on the 24th of August, 1977 in Ikorodu area of Lagos State.

The actress got famous in her lead role in her movie ‘ Jenifa’ which she got the nickname from ‘ Omo Ghetto’. She was bought to the limelight when she featured in the sitcom I need to know from 1998 to 2002 and in 2009.

Jenifa has married a polygamist called Kehinde Oloyede before she married Abdulrasheed Bello. Let’s look at her two relationship.

The first husband of Funke Akindele is Kehinde Oloyede. He is a polygamist, the son of one- time Iya loja and a politician. They did their Nikkai Ceremony on 24th May, 2012.

Surprisingly, their marriage lasted for 413 days only. The union seems like a business transactions. They both got famous in one way or the other. Kehinde has no intention of marrying her he just her to make fame for himself.

Kehinde wasn’t there for her in the marriage, not even a public function he attended with her to cover up. He doesn’t come up for month always having business trip with different ladies.

Even when some blogs and news started sharing a rumour that Modinat Dada is 7 month pregnant for him, Funke went online to debunks the news saying her husband has several beautiful children but he only married her and paid all her rites.

Three month after she debunks the news, Kehinde bought Modinat baby himself to the matrimonial home. This was a slap, abuse on her physically, emotionally and verbally. Not only that, few month before their marriage, Fadake had to fly out of the country to Dubai because she was pregnant for him.

Kehinde is just a bed share as Funke Akindele said. In an interview, she explained how she faced hell in the marriage with her ex husband, she said ‘’That place is not for me, I have been through hell and back. I was abused emotionally and verbally. Really, I felt we could work things out when the trouble started two months after the marriage.”

READ ALSO: Is Liquorose decent or she is just like many other casual girls out there?

But I made up my mind and shut the door of the marriage at him when the trouble was coming to me too much.” – said Funke Akindele. Kehinde declares his divorce on Facebook saying ‘‘ It’s with a heavy heart what am announcing the separation of me and ma Mrs. Olufunke Akindele, we’ve both agreed to go our separate ways coz of irreconcilable difference.

“We are still best of friends and we 4verremain, good friends’’ Funke Akindele former husband reveal’s after some minutes of publishing that post, he deleted it.

At that same minutes, Funke also have went on to release an official statement via her publicist, Mr Ayo Ola Mohammed, the principal consultant representing NEECEE Entertainment, the post was like, ‘On behalf of my client star actress, Funke Akindele, we want to formally inform you that after due and consultant and consideration, she has now separated from Mr. Kehinde Oloyede as his wife’’.

After the divorce talks and everything, Kehinde visited her father’s house severally to make up things with her. He went to the extent of texting her that he has found a buyer for one of his house.

The deal is 40 million that once he pays the money, he would a car he promised her and an apartment. But she refused because she knew she got a long way to go than rather wasting it with a man that don’t values her. After she refused, he started cursing her.

On his youngest wife wedding, he bought the car he promised he Funke and handled the keys over to the young wife not only that he throws shades at Funke too. He drags Funke severally for not managing her marriage well.

READ ALSO: “My mum gave me only 900 Naira when I was going for BBN” — BBNaija Star, Sammie reveals0

Funke Akindele Bello did a private wedding in London with his present husband, Abdulrasheed Bello popularly called JJC Skillz in May,2016. Although, he’s a Nigerian, he started living in abroad since he was 14 years old.

He said he had the dream around December, 2012 but it’s bit confusing because Funke was married as at then, buy only God knows how he plans his things.

He also sad he tried making advances towards her but she didn’t believe him until 2016 she finally accept him and they’re happily married.

Meet Baba Kekere, Who Has Served Three Alaafins Since 1945 (Video)

Mercy Aigbe has reportedly packed out of Kazeem Adeoti’s house