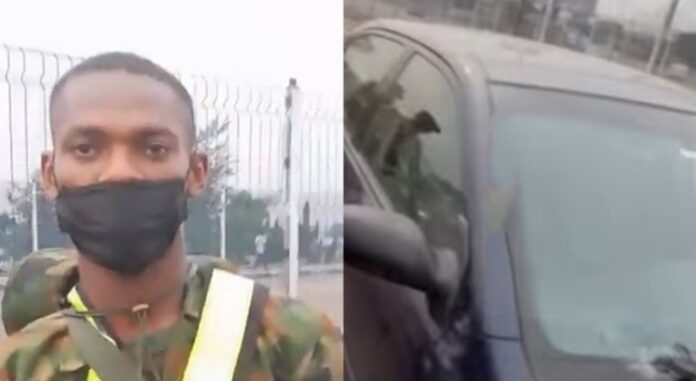 A Nigerian man identified as Faithful Olutunde has been seen in a viral video confronting a soldier who smashed his windscreen in Lagos.

The man shared the video with the public while he gave an account of what transpired between him and the uniform officer.

According to Olatunde who is a cab driver, when he was driving from Muritala Mohammed International Airport Lagos, and he was moving close to a traffic on the bridge towards Lagos State University Teaching Hospital, LASUTH, he saw 2 soldiers directing traffic.

He revealed that as he was about to move was when those two soldiers told them to move, so the guy he was carrying was buying gala sausage and he gave the seller N100 to buy it, but they were then asked to move so he had no option than to move slowly to enable his passenger to buy the gala.

The soldier controlling the traffic then asked him to move fast, but when he got to his front, shockingly to him, the officer smashed his windscreen.

That got him angry and stopped to confront the Army man who started molesting and threatening to harm him.