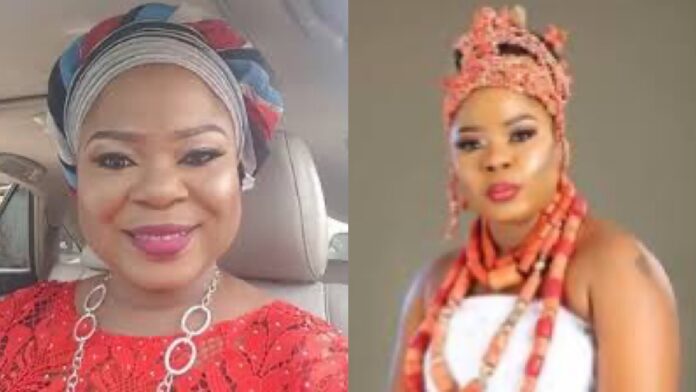 The biography of Funke Etti. She is a popular Nollywood actress and movie producer known for her brilliant roles in the Yoruba movie industry.

Funke Etti is a Nollywood actress, producer and TV presenter. born on the 26th of April, 1975 in Lagos Island part of Lagos State.

Funke Etti was born on April 26 in Lagos. She hails from Isale Eko, Lagos Island, Lagos state. The Nollywood actress is the last child in a family of four children.

Funke had her primary education at St Augus Primary School and Igbobi Girls High School both in Lagos State. She went to a state university to study Business Administration as a per time student for two years before she quit. She proceeded to the University of Lagos and bagged a Bachelor’s degree in Economics.

Funke Etti was introduced into the movie industry by a movie producer, Kola Igida Latunde Films. She was given a role to play which gave her more opportunities for subsequent roles in movies. Funke acted in her first movie titled ‘Abe Aso’ produced by the late Yinka Ajomo in 2009.

Aside from acting, Funke is an event planner and a TV presenter.

Funke has starred in several Nollywood movies including:

Funke grew up as an orphan, she had a tough time growing up but God saw her through. She sadly lost her mother in 1988 and her father in 1996. The actress remembers her late mother who passed away 34 years ago. She is the fourth child of her parents.

Three days ago, Funke took to social media to mourn her mother, saying she loves her so much and still have beautiful memories of her mother. She wrote in her words that the 5th of January made it 34 years since she left them. Beautiful memories Iya AYINKEADE.

Funke Etti doesn’t disclose her family information to the press. Nobody knows who her husband is but she reveals that she is happy with her husband.

Funke Etti is a prominent Yoruba actress with an estimated net worth of $200,000.