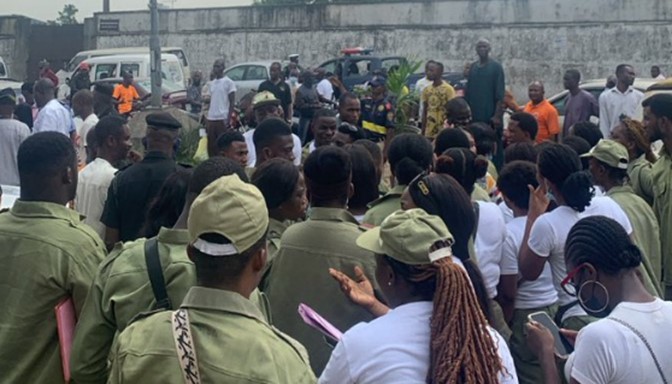 Personnel of the Lagos State Police Command on Wednesday has been reported to have allegedly arrested three members of the National Youth Service Corps, NYSC in the state.

According to an eyewitness identified as David @themccoyman on Twitter, he revealed some officers whisked away from the corp members who were in a Mercedes Benz outside at the venue for their Community Development Service (CDS). Eti-Osa Local Government office, Lagos.

The eyewitness revealed that the incident happened in a few seconds, and the officers attempted to drive away with the Benz but were stopped by people around.

He also said they were able to secure the release of two of the corp members.

David however disclosed in a follow-up tweet that the third NYSC member was eventually released other corp members intervened.

Sharing a photo, he wrote; ”Supposed police officers just kidnapped three uniformed “corpers”, on CDS day, in front of the Local Government Office at Eti-Osa, Lagos. We were able to immediately recover two of them but one is still missing. All of this happened in seconds, in broad day light!

Hours later, he added; Please, this kidnapped corper has since been released. Well done to everyone who stood gallant this morning.

Shocking event though. All my fingers are pointed to the Nigerian Police Force and a certain peace-loving Governor.

No, I will not refer to this as an arrest. It was a kidnap.

These corpers were sitting peacefully in their Benz. They were suddenly surrounded by men (in regular clothes) who pointed a gun at them and yanked them from said Benz.

Here is a video that tells some part of the story. A few of these kidnappers tried to leave in the Benz but fortunately, they were swarmed by corpers. Look, there’s a lot of infuriating audacity on display! May God save us all from this country.”